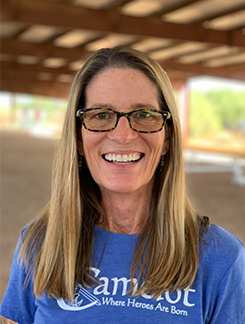 Mary first walked through the gates of Camelot to gain information about starting her own therapeutic horsemanship program. Instead, she found her destiny. An hour after leaving, she returned with a fully completed application for Camelot’s internship program, which she entered in 2002. Within a year she was Camelot’s assistant barn manager; within two years she became director of riding instruction. Since 2004, she has served as our executive director.

Mary is a PATH Intl. Certified Therapeutic Riding Instructor and CHA Master Level IRD instructor. Her horse career spans more than forty years. As an avid dressage enthusiast, she is intrigued with the horse/human connection and shares this love of equus with Camelot’s students. “Camelot is a place of dreams and empowerment,” says Mary. “Our horses teach our riders to reach for the moon. Nothing is impossible!” In addition to teaching at Camelot and riding her horse, Cliffy, Mary also enjoys photography, hot air ballooning, cycling, sailing, and stand up paddle boarding.

Prior to Mary’s work at Camelot, she worked as an instructor at the National Ability Center, a non-profit organization in Park City, Utah, that offers a variety of outdoor activities for people with disabilities. She also worked for several years in the mortgage business, which equipped her with the tools to handle the financial aspects of running our organization. Mary brings an enormous array of gifts and talents to Camelot, including dedication, drive, sensitivity, and proven leadership skills. Her passion for the ideals of Camelot is evident in the work that she does and the lessons she teaches. One of her favorite sayings is, “The speed of the team is the speed of the leader!” 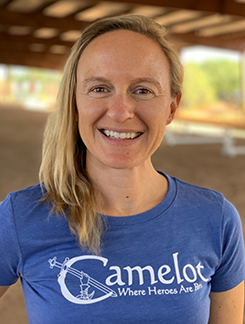 Hannah began volunteering at Camelot in 2010, ultimately joining the Camelot staff in 2013. She is a PATH Intl. Certified Therapeutic Riding Instructor, PATH Intl. Certified Driving Instructor, certified riding instructor through the American Riding Instructors Association in hunt seat and dressage, and a Registered Yoga Teacher through Yoga Alliance. Hannah holds a Bachelor of Arts in Human Services from the College of Saint Mary and a Master of Arts degree from the Arizona School of Professional Psychology.

Hannah grew up riding and competing in hunt seat and dressage in Nebraska, prior to moving to Arizona for graduate school. An alumni of Meredith Manor International Equestrian Centre, Hannah has led Pony Club, taught beginning and intermediate riding lessons, and held horsemanship summer camps. 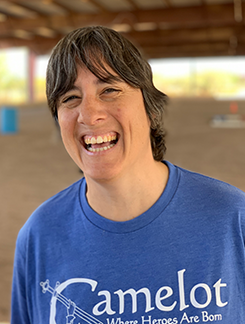 Alicia’s horse journey began as a child in 1994 when she had the great fortune to be a student of Eileen Szychowski, Camelot’s founder, for 6 years. After completing an Equine Science Degree from Scottsdale Community College and a Journalism Degree from ASU, Alicia returned to Camelot in 2010 with the goal of becoming a PATH certified instructor. Over the next eight years, Alicia honed riding skills, developed teaching techniques, and mentored under the Camelot instructors.

In March, 2019, Alicia attended a PATH Intl. certification workshop in Oceanside, California, where she successfully completed and obtained her instructor certification—a certification that fewer than a dozen people with disabilities hold. The full measure of this accomplishment will be seen in the years to come. 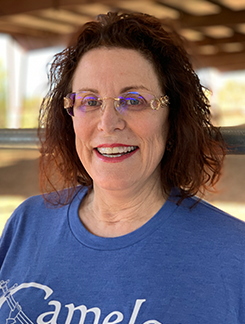 Robin first became interested in Camelot when a friend who participates in a similar program overseas directed her to our web site. She began as a volunteer, and then in 2006 assumed her current staff position. With a lifelong love of horses and a background in both education and banking, Robin is well-suited to be a member of Camelot’s royal family.

Robin attended Humboldt State University and California State University Los Angeles, graduating in 1975 with highest honors and a BA in Liberal Studies. She continued on to graduate school and earned both a standard elementary credential and special education credential in 1976. After several years of teaching for the Los Angeles County Superintendent of Schools, she changed tracks entirely and became a consumer credit loan officer for First Interstate Bank. In addition to keeping the rest of the Camelot staff in line, Robin also works part time for her husband’s Los Angeles-based consulting firm.

In her spare time, Robin likes to ride her Paint horse, Gizmo; play with her Bouvier, Kramer; and play Mah Jongg. Robin sums up everything equine in a way well-known to every true horse lover: “There’s something about the smell of horses and a barn that’s so enlivening, invigorating, and renewing.” We all know exactly what she means! 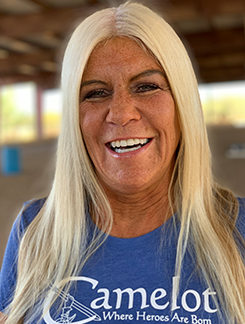 Following her retirement in 2014 from a successful 30-year career in sales and marketing, Cathy passionately pursued a new path of volunteerism. She began working with the Hospice of the Valley as part of their “Soup Troop”, preparing homemade, doctor-approved soup recipes for the program’s patients and their families in palliative care units. Cathy went on to receive training in patient home care and facility care, as well as spiritual care for end-of-life patient/family requests.

A lifelong animal lover, Cathy discovered Camelot around this same time and began volunteering as a ranch hand. She eventually transitioned to assisting with student lessons, a role that she says has brought her a great deal of joy and fulfillment. In addition to her official position as Weekend Ranch Hand, Cathy continues to volunteer in the lesson program on a weekly basis.

Cathy describes Camelot as her dream come true; she loves working with the students and the horses, and feels incredibly lucky to have the chance to help other people set goals and realize their dreams.

“Don't believe what your eyes are telling you. All they show is limitation. Look with your understanding, find out what you already know, and you'll see the way to fly.”
~Richard Bach

Our Board of Directors